Frank Carter & The Rattlesnakes, Enter Shikari and Bullet For My Valentine have been announced as the headliners for this year’s Download Festival pilot.

Download organisers confirmed earlier this week that the Donington Park bash will make a small-scale return next month for a three-day camping pilot as part of ongoing research into the safe return of live music.

Organisers say that “moshing is allowed” when 10,000 fans descend on Donington Park from June 18-20.

Now, it’s been confirmed that the above three acts will lead proceedings for the pilot event.

Other acts taking part in the pilot include Frank Turner & The Sleeping Souls, Creeper, While She Sleeps, Neck Deep, Chubby & The Gang, Boston Manor, Twin Atlantic and Skindred.

“There is nothing that beats the experience of a live rock n roll show especially after all the lock downs,” said Skindred’s Benji Webbe.

“It’s something that cannot be downloaded and does not work either as a live stream. So to be involved in this much needed and very special pilot event is an honour. We cannot wait to celebrate and bring the party to Donington Park Skindred style again this June.” 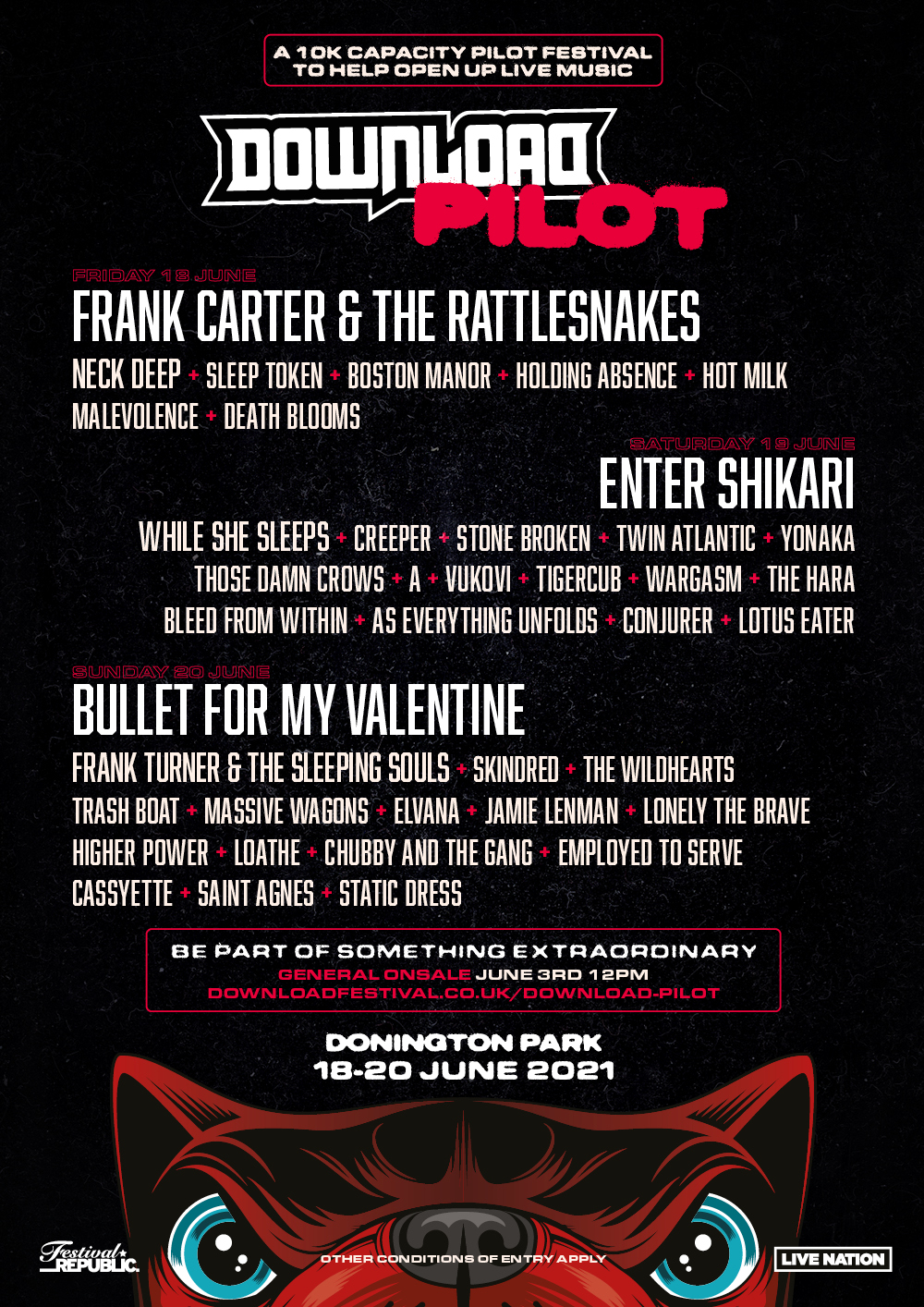 The event will form part of the second phase of the UK Government’s scientific Events Research Programme.

Festival Republic boss Melvin Benn, who previously teased a camping pilot, said: “Following the huge success of our Sefton Park event, we are delighted to contribute to Phase II of the Government’s Events Research Programme with the creation of the first three-day camping festival which will be the Download Pilot at Donington Park.”

“This massive next step will help us understand and study the safe return of large-scale festivals with no social distancing or face masks over a full weekend… the return
of the full festival experience we have all been waiting for and a much needed return to work for musicians, backstage crew, caterers and many more that form part of the UK’s exemplary live music industry.”

All attendees must be aged over 16 and be willing to stay for the whole weekend when  go on sale here from Tuesday (June 1).

The first stage of the government’s events research programme saw thousands of music lovers attending a series of pilot events in Liverpool over the May Bank Holiday weekend, where the likes of Fatboy Slim and Blossoms played to a crowd without any Covid restrictions.

Just 15 people tested positive for Covid-19 following the event, with initial data suggesting that holding mass events without face masks and social distancing poses as little risk as going to a shopping centre or restaurant.

Initial data from the event suggested that holding mass events without face masks and social distancing poses as little risk as going to a shopping centre or restaurant.

Download Festival will make a full return in 2022 with headline sets from KISS, Iron Maiden and Biffy Clyro.